Martin Pöll’s work is based on natural materials; as formal idiom, as working material and as experiential space, nature serves him as repertoire from which he develops his sculptures. Pöll’s works frequently show profound combinations of form and material, such as casting a waterlily leaf from tree resin – which, on first sight, looks like the burned cross-section of a log –, or a piece of tree bark, leaning against the wall, shaped like corrugated metal. The individual steps of the process to make a raw material viable often become visible elements in Pöll’s exhibitions: from a bar of solid resin to bottled tree resin fumes, from terrazzo tiles with pieces of resin to resin schnapps served at the opening. His exhibitions all evolve around the combination of basic forms which derive from the geometric shapes found in his natural materials. Pöll combines these forms into static constructs of identical repetition which offer an unlimited potential for rearrangement and new composition. Martin Pöll (*1990 in South Tyrol) lives and works in Karlsruhe, Germany.

Martin Pöll’s work takes its starting point from natural forms and materials, from the relation between his own body and nature, its movements in natural environments as well as in the sculptor’s workshop. Natural materials like tree resin, leaves, bark, clay or wood, and maple, spruce and balsam seeds are the basis of Pöll’s work, just as collecting and processing tree resin is an essential part of his work. The work process to make a particular raw material viable for further processing remains a central element when exhibiting the final objects. In order to prepare tree resin for casting sculptures, a lengthy process of boiling and refining is necessary. Resinating the material produces a number of byproducts which Martin Pöll integrates into his work. The exhibition “Sans Transition”, Meisenthal, 2018, for example, shows a pile of unrefined tree resin lying on the floor of the exhibition space; a pipe extrudes from the pile: a miniature resin burner, which evaporates the exact same smell that also accompanies Martin Pöll’s work, when processing tree resin in his workshop. Other exhibitions also include bars of resonated tree gum or resin vapor in form of essential oil (“Parfum”, 2019). In “time to get hi”, Zentrale Karlsruhe, 2020, Martin Pöll presents a stylized distillery on four steel legs. Here, the exhibition space itself serves as workshop where tree resin is being cleaned and refined into essential oil and vapor, which then – in form of small artist editions of distilled schnapps – become part of the exhibition.
Cast as sculpture, tree resin already had a central part in “Ode an eine Seerose I–IV”, 2017/18. For this work, Martin Pöll casts waterlily leaves of about 1,30m diameter in resin; in their new materiality and structure, the leaves resemble the burned cross-section of a tree. For the installation “Sonne, Mond und Sterne”, 2019, Pöll mixes granulated resin with plaster into a material for terrazzo-style floor tiles. The tiles are cast in precise shapes that will align and expand into unlimited, variable surfaces. Depending on context, setting and space, the theme of infinite variability appears in different versions in many of Martin Pöll’s exhibitions: in the ensemble “Sonne, Mond und Sterne”, 2019, as a wall hanging of Coccaloba leaves – gigantic leaves of a South American plant from the Botanic Garden – set against natural backlight; or in the in-situ piece “shapes”, 2019, for the exhibition “50x50x50 Freiräume – spazi liberi”, Festung Franzensfeste, South Tyrol, as a six-foot something spruce sculpture, geometrically assembled into an outdoor installation that might also serve as a weather shelter.
To work situational for a particular exhibition context is an essential part of Martin Pöll’s artistic practice. For “fliegen lassen”, 2019 – a four-meter clay sculpture, illustrating the flight of a maple seed – he collected the material on site, at the exhibition area: the Franklin compound in Mannheim, where the sculpture was later exhibited in one of the site’s oversized industrial buildings. Collecting the clay for this piece, just as the piles of resin Martin Pöll harvests for his work from the forest, implies an act of physical effort, a movement through the exterior world. In “Route de Meisenthal à Karlsruhe”, 2018, Martin Pöll‘s movements between Karlsruhe and Mannheim, where he drove regularly – though on different routes – for work, have been cast into a plaster sculpture that documents his physical motion through space.
In his tree resin sculptures – his primary working material – Martin Pöll creates elaborate plays on form and material: in the column “hraun”, 2017, the material resembles volcanic rock; by contrast, the smooth surfaces of “confine”, 2018, which follow the outlines of Lake Constance, Lake Garda and Lake Geneva, look more like epoxy, glass or water. Nature and the forest are fundamental resources for Pöll’s work; they are also his home: The installation “spruce seed”, AdBK, Karlsruhe, 2018, consists of an enormous, magnified spruce seed, a horizontal spiral modelled after the flight of a spruce seed, and a sheet of bark leaning against the wall, shaped like corrugated metal: enough to sit, to drink and to take shelter.
Martin Pöll (*1990 in South Tyrol) lives and works in Karlsruhe, Germany. 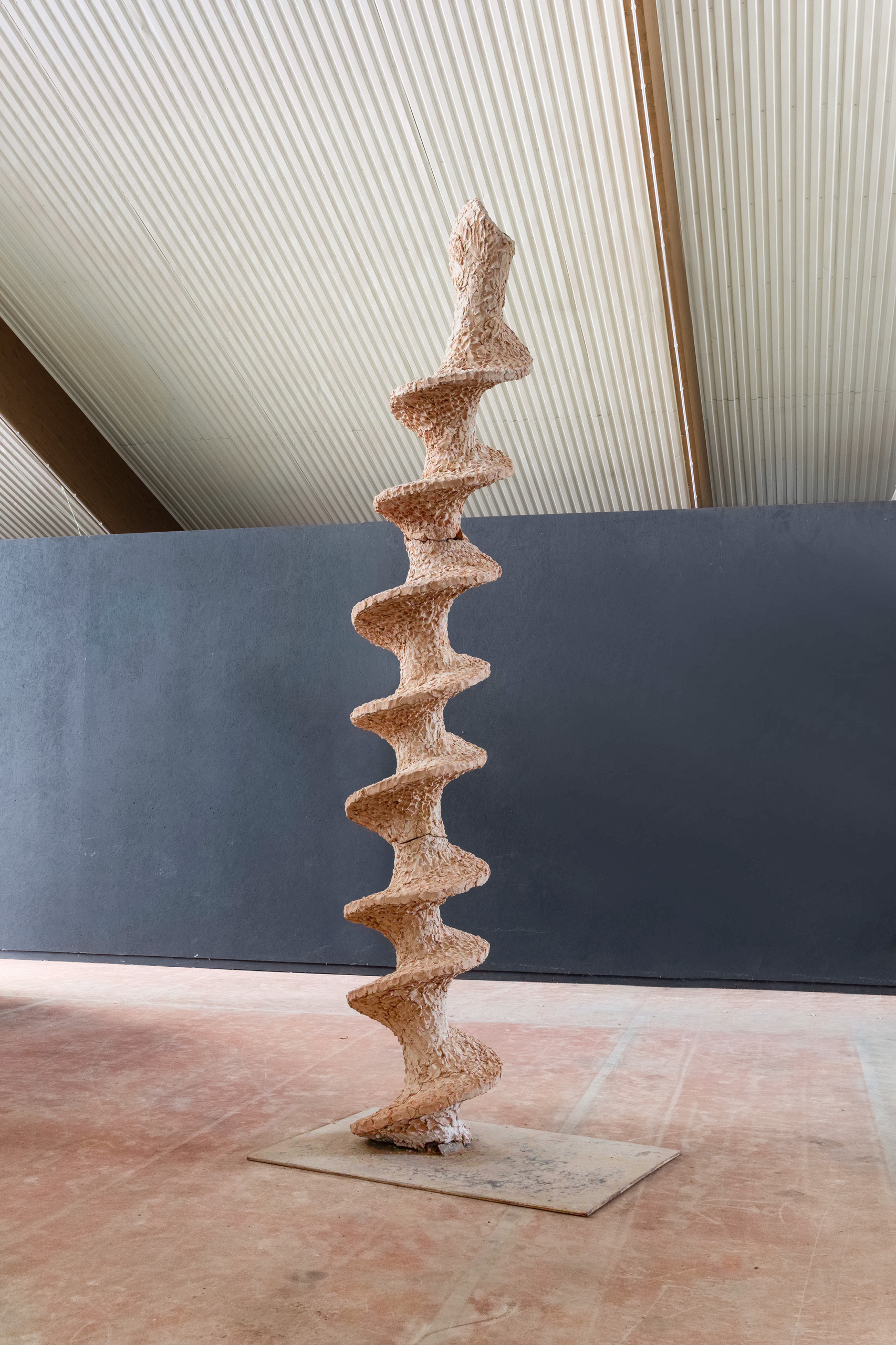 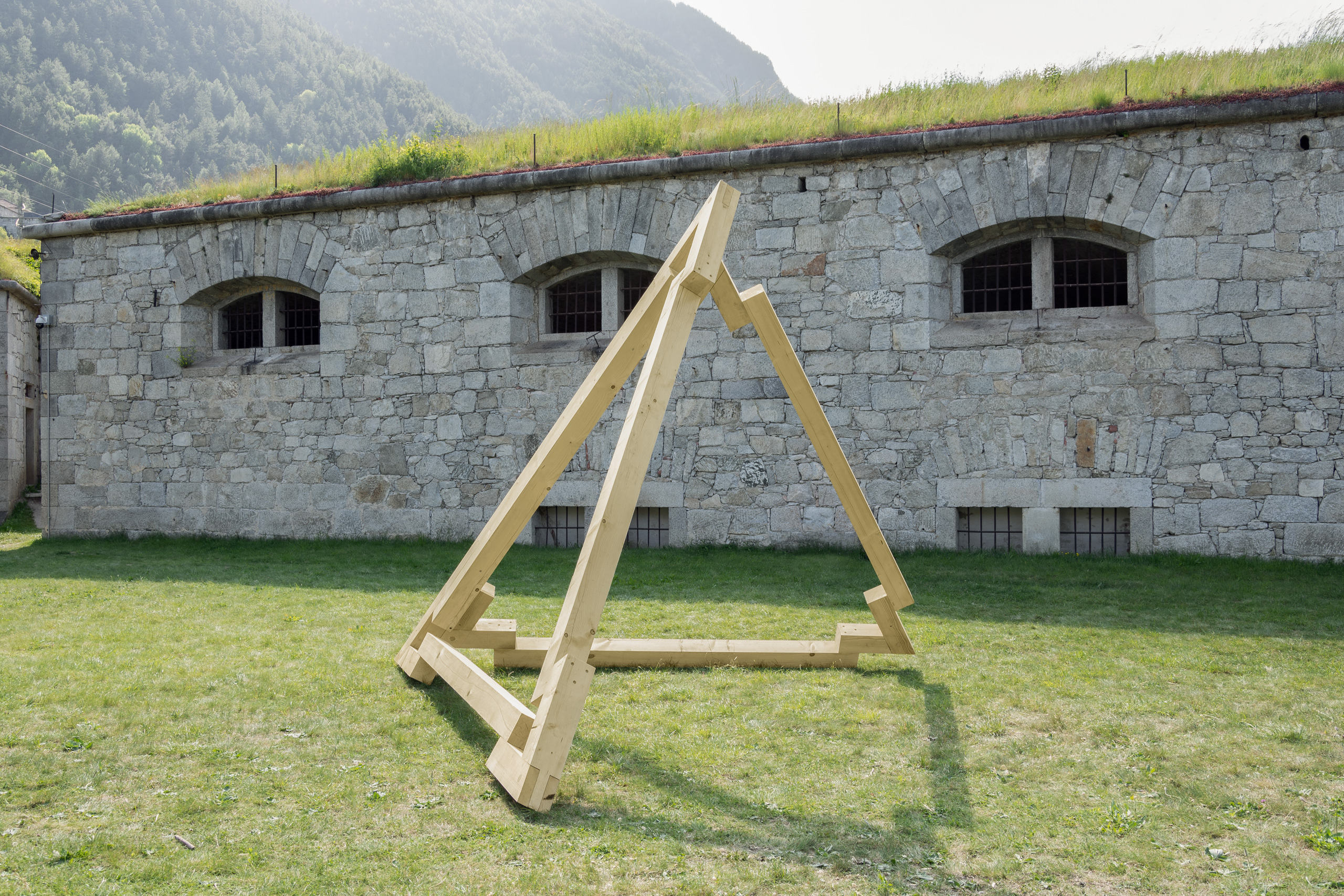 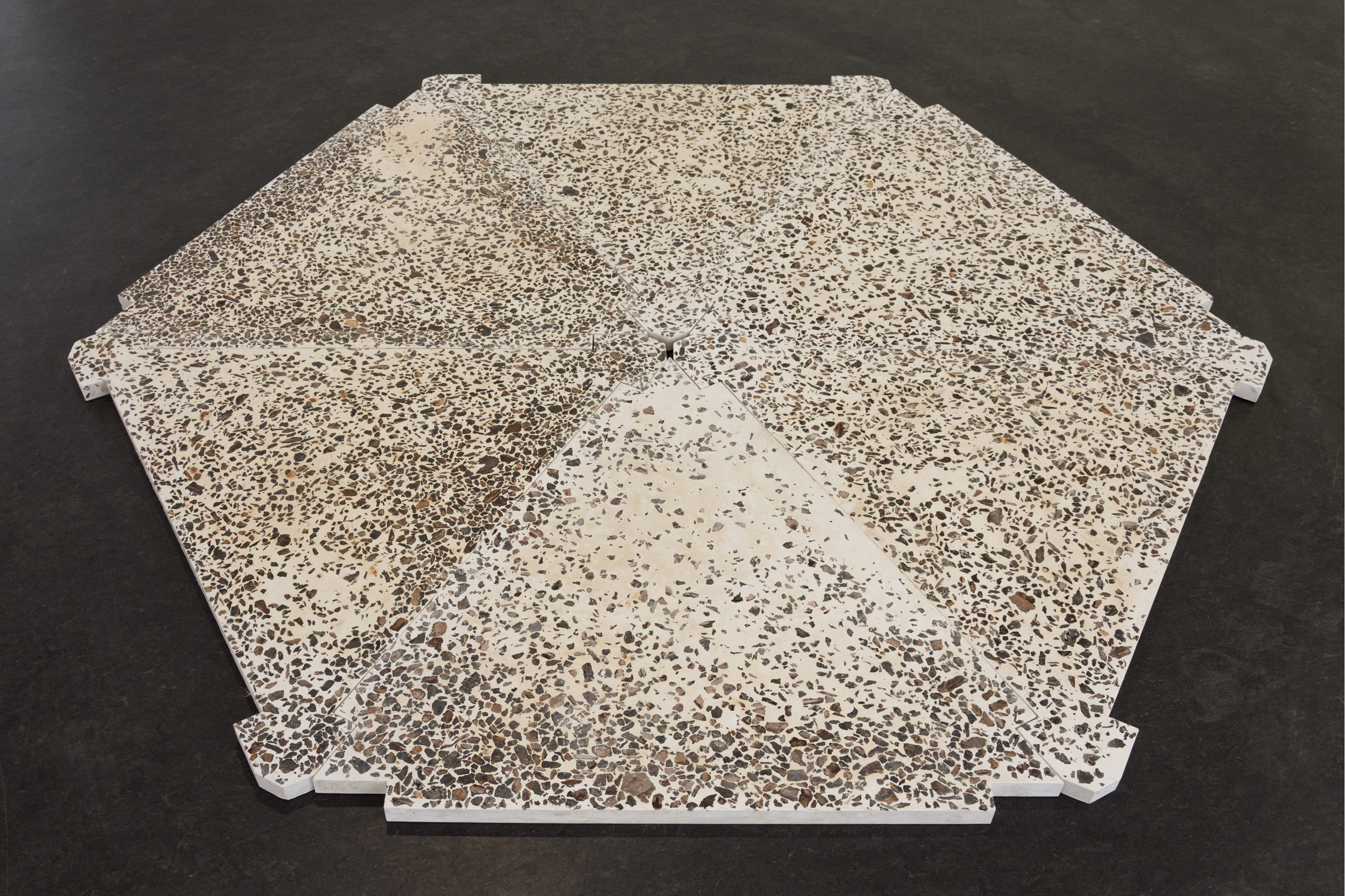 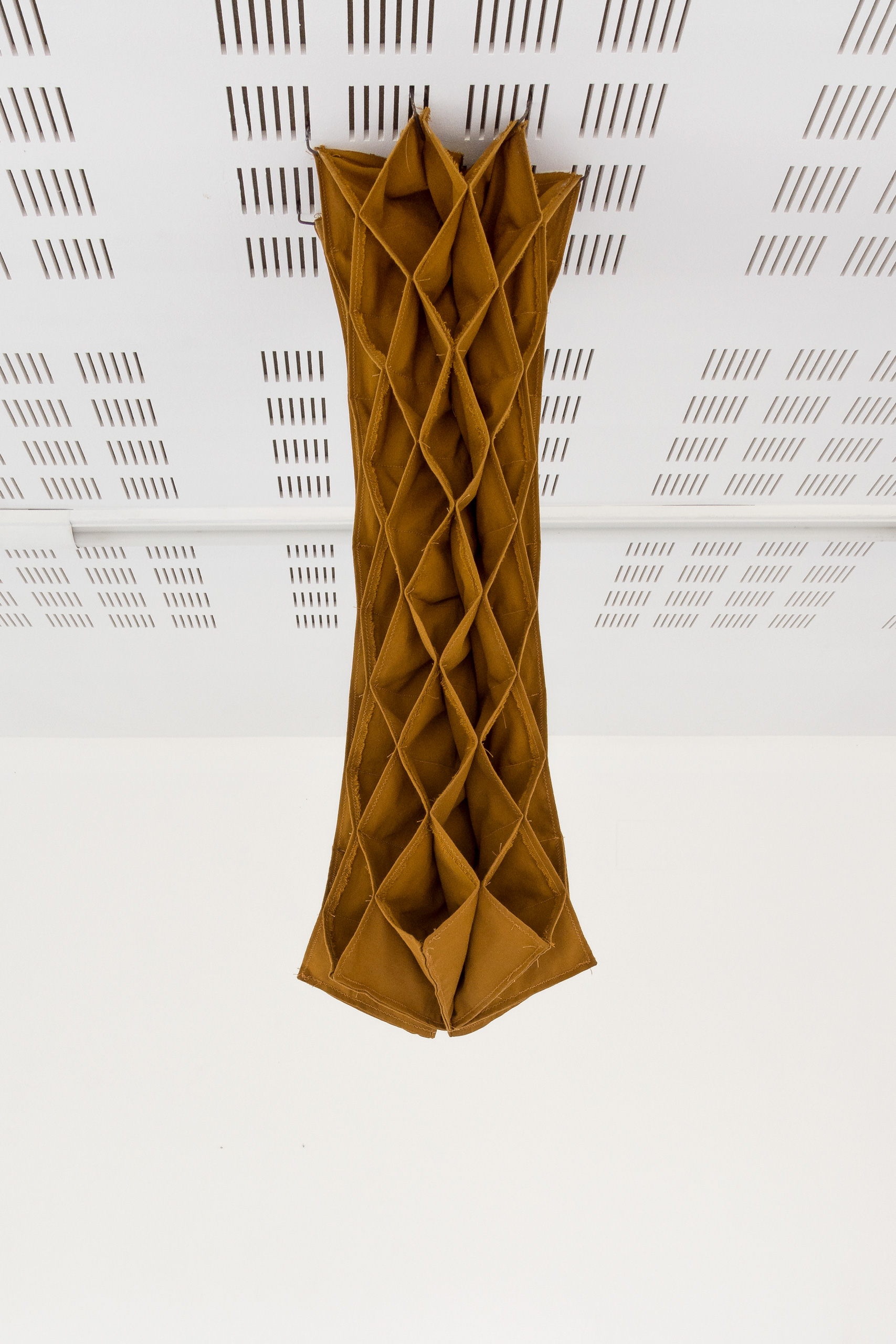 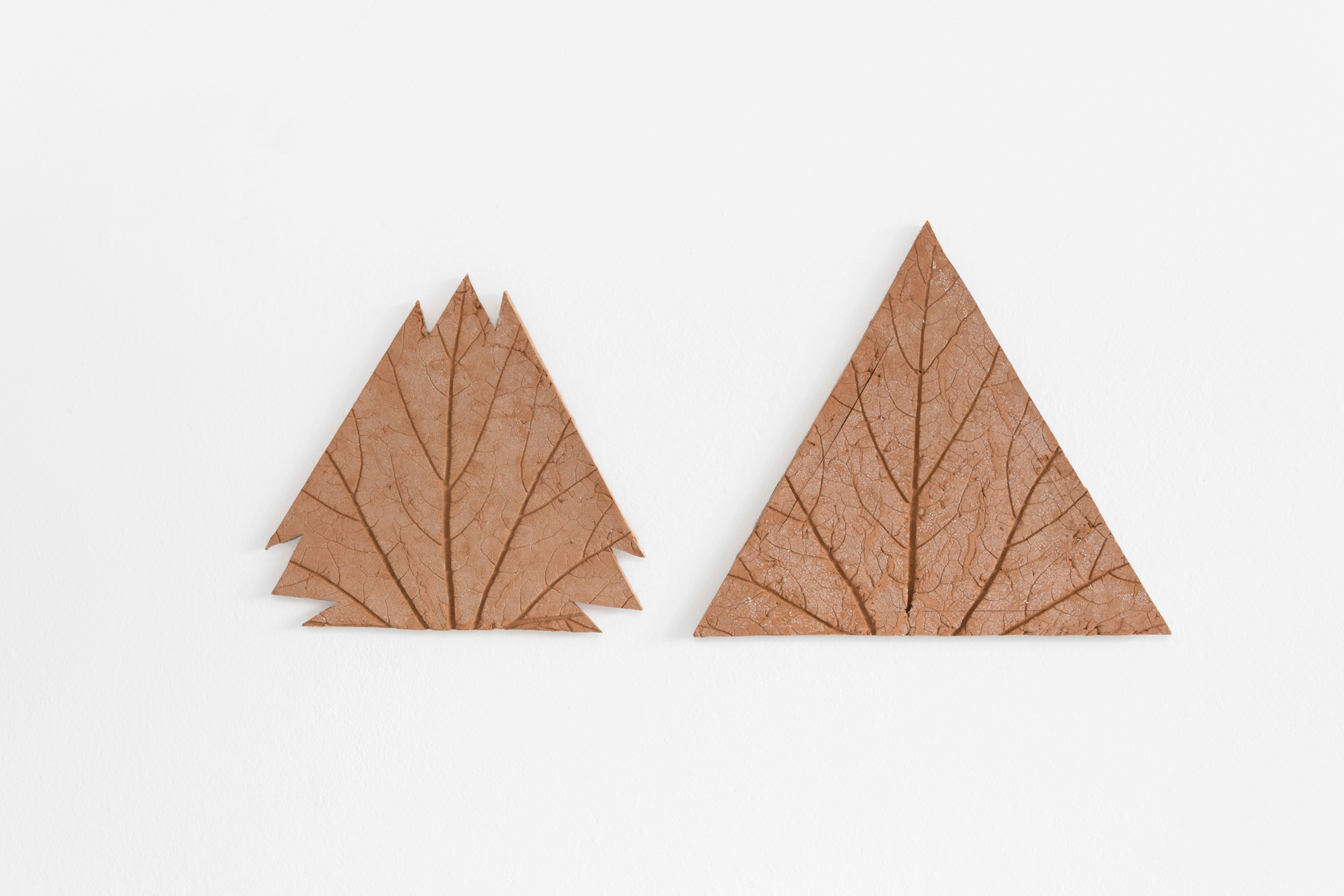 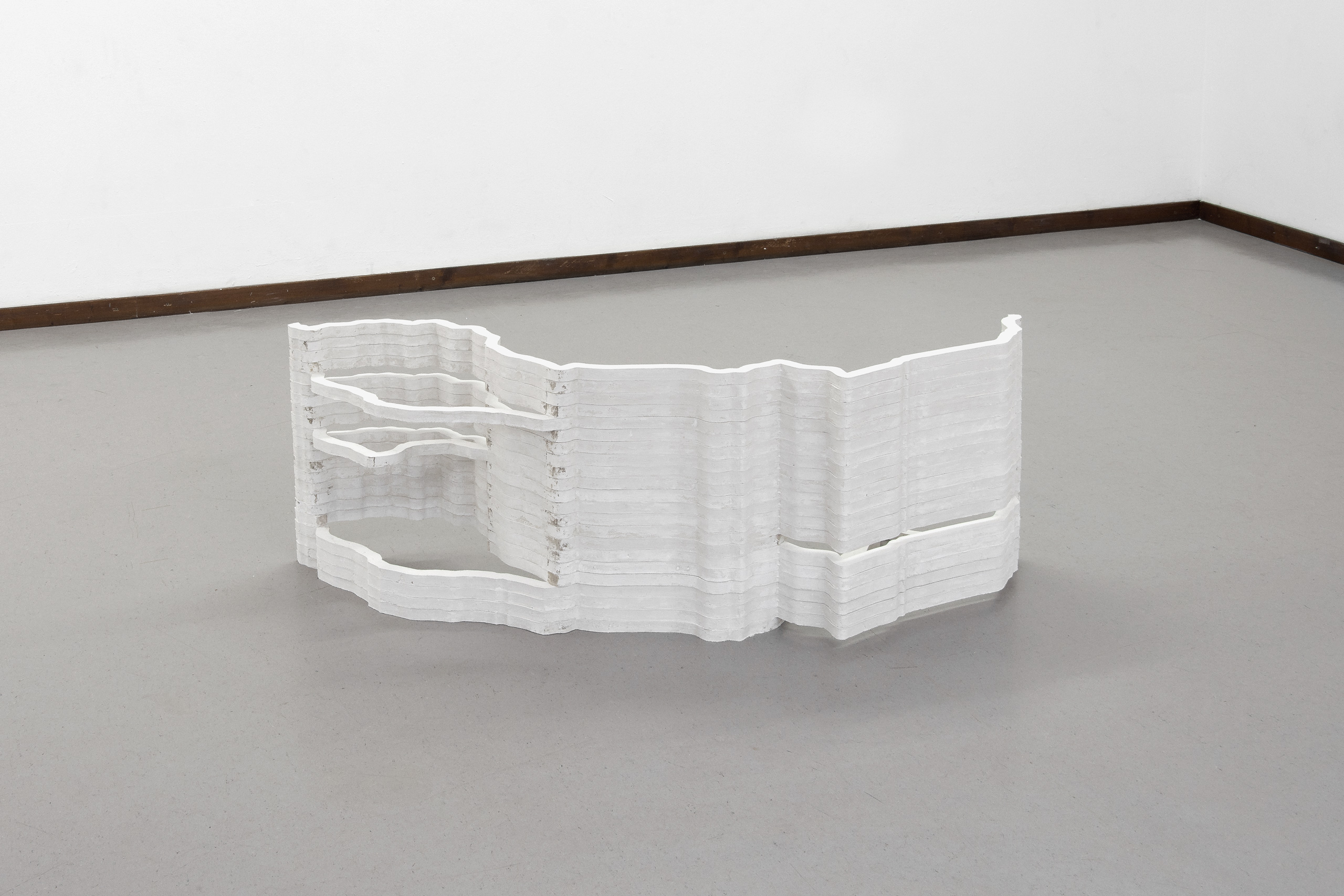 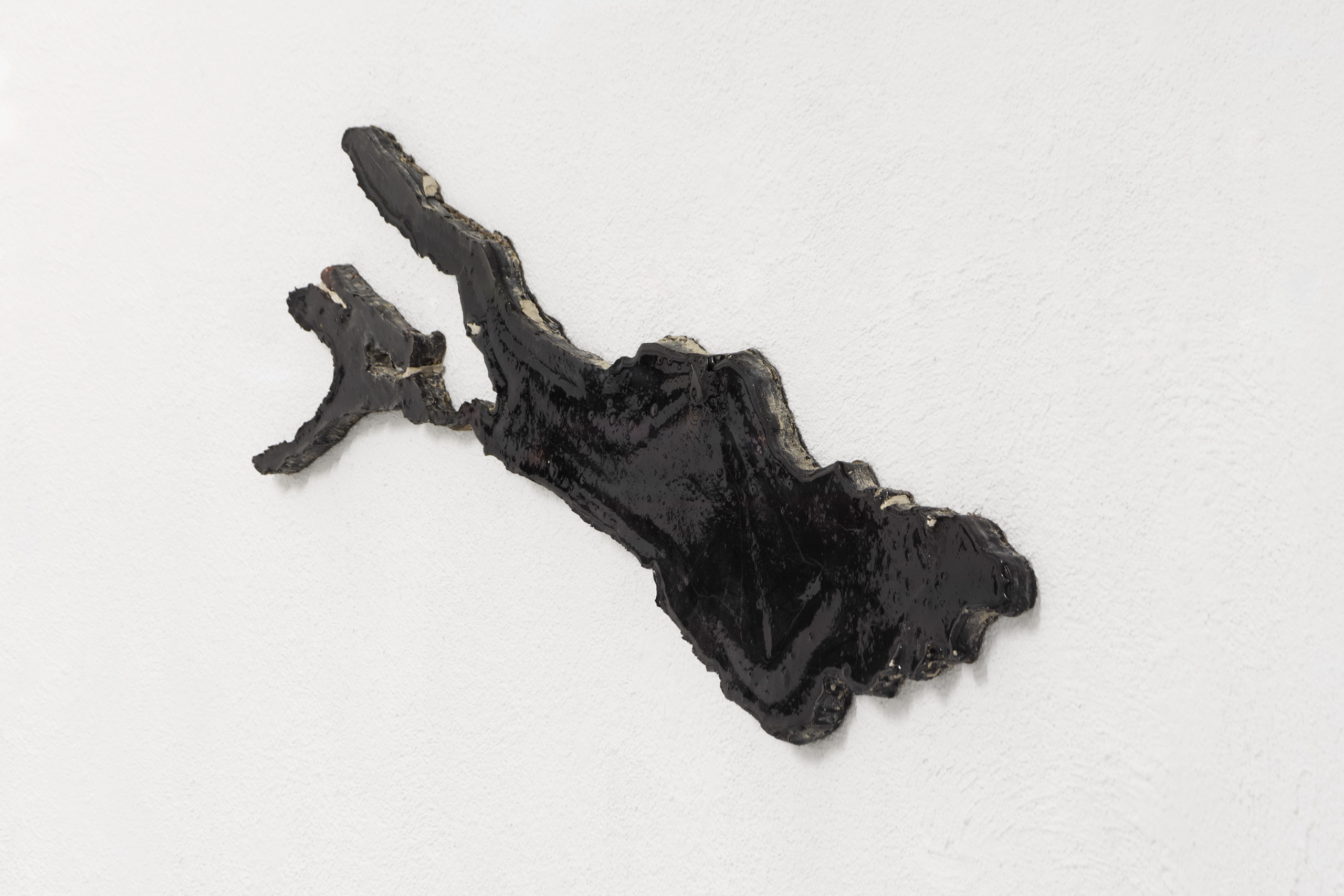 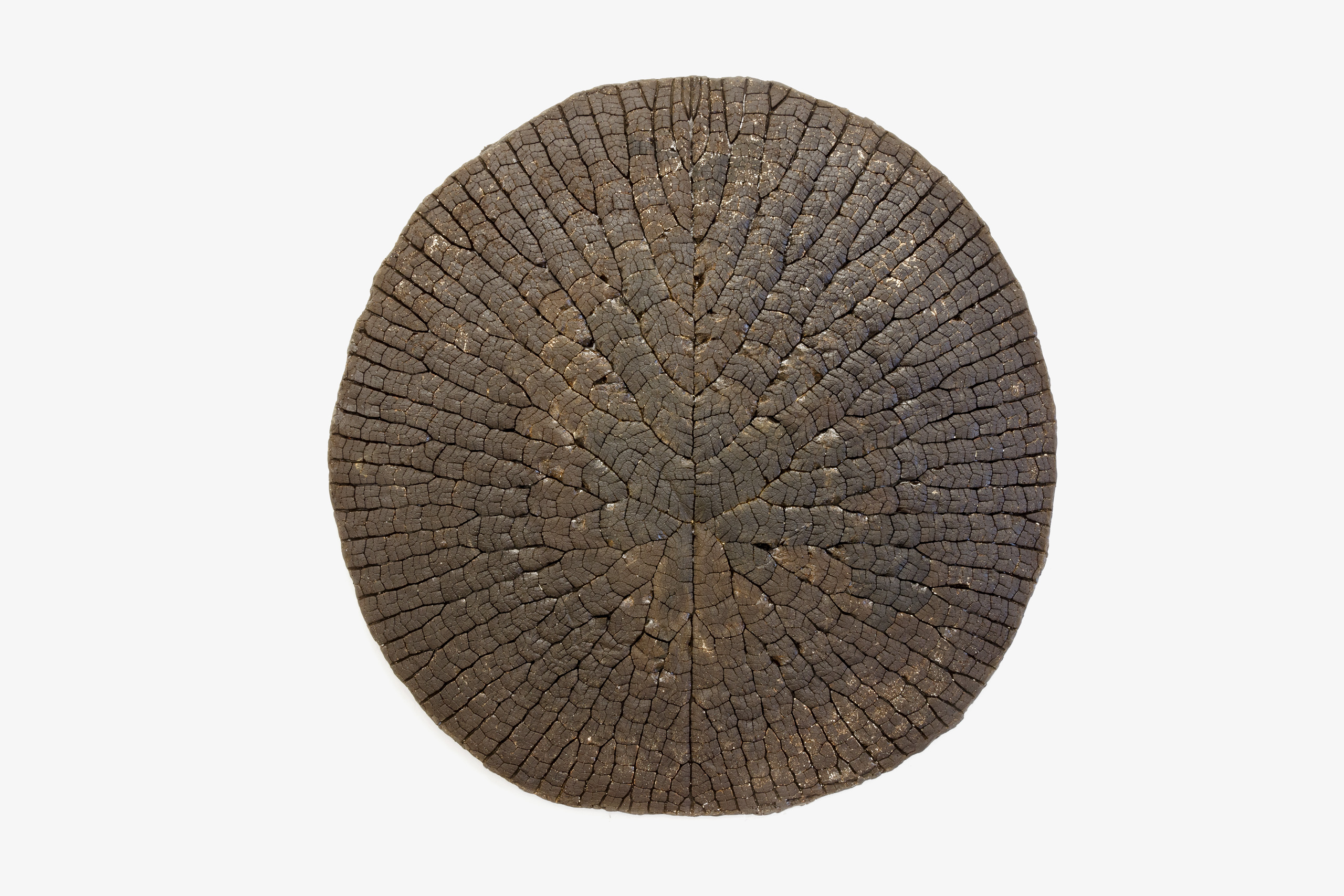 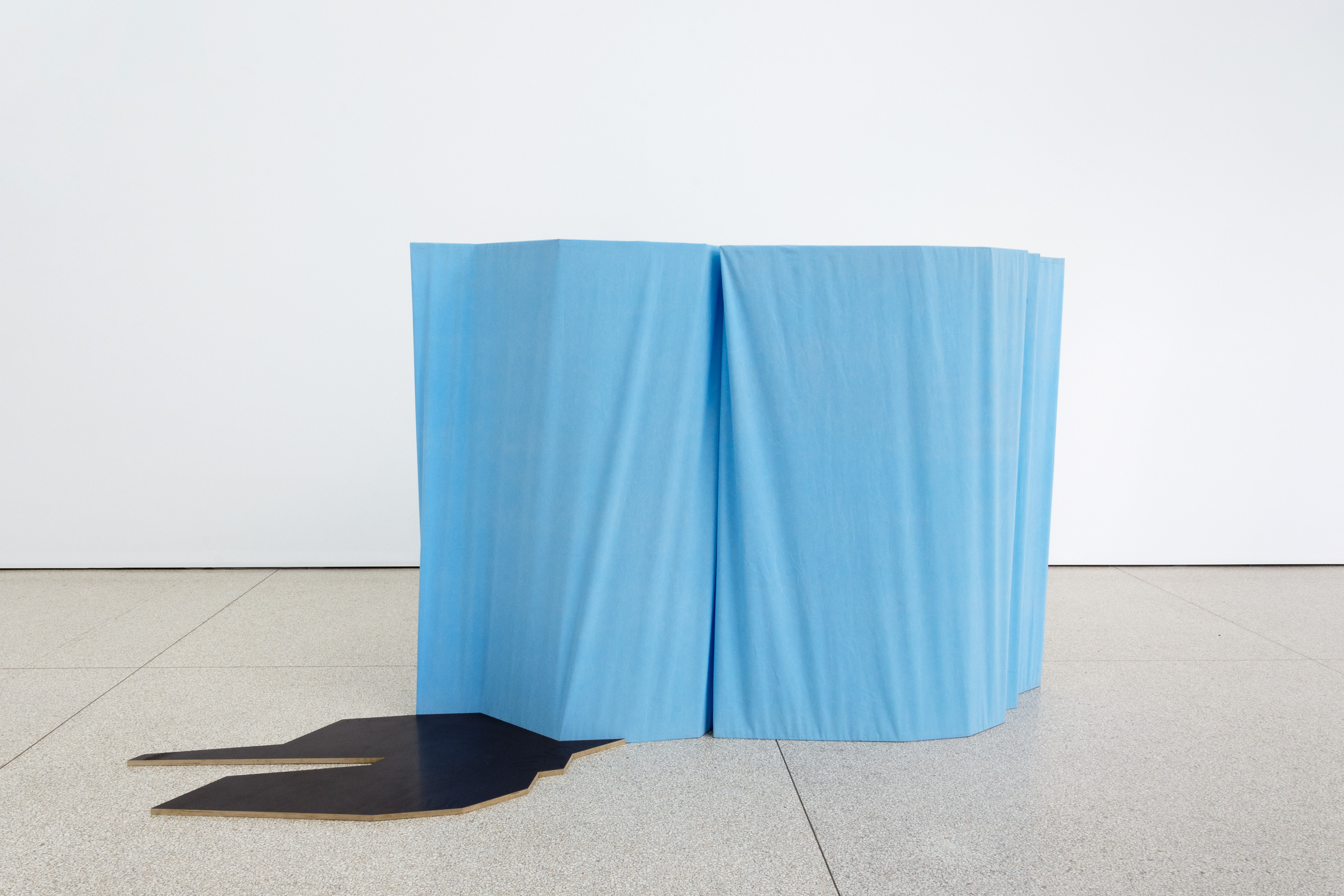 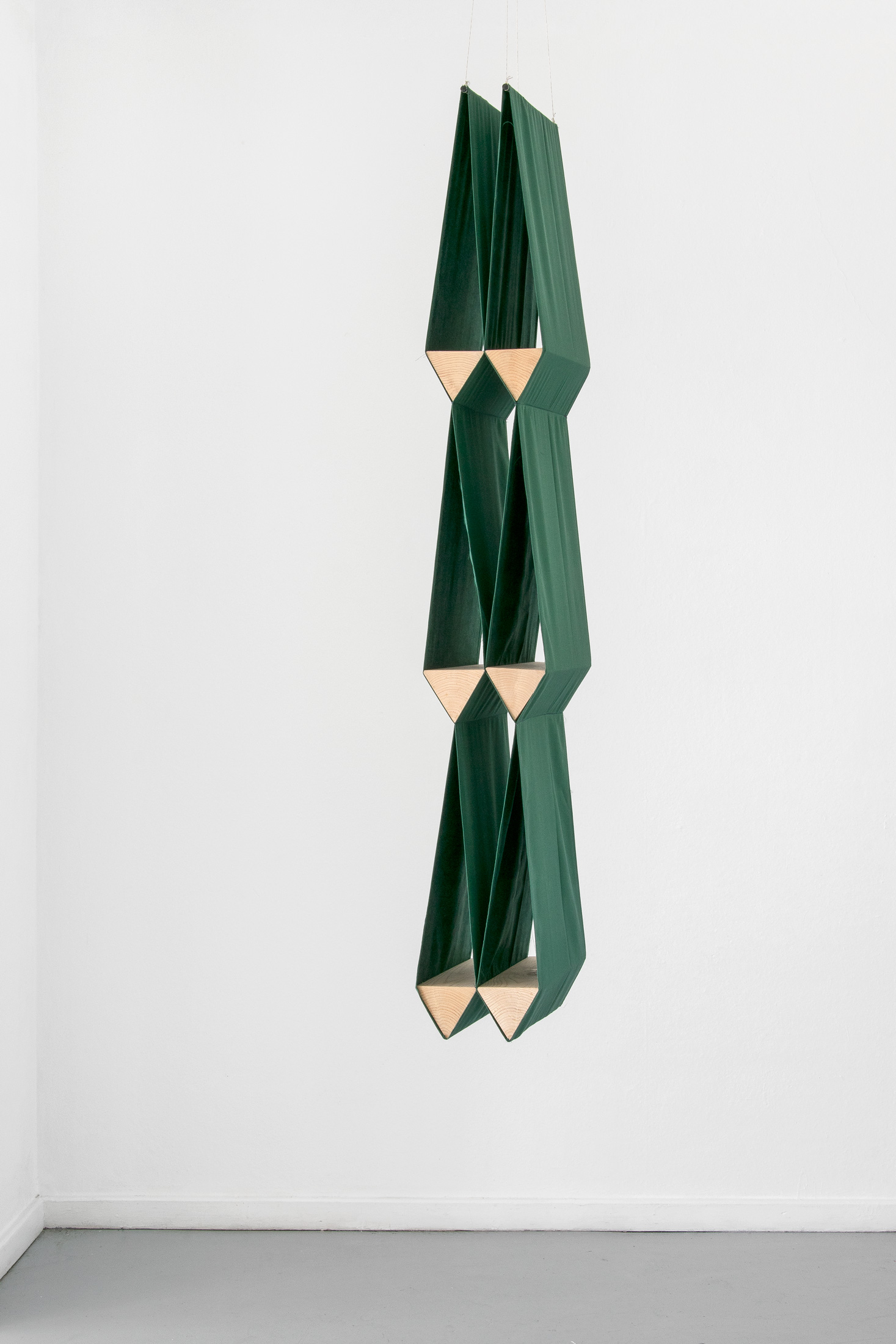 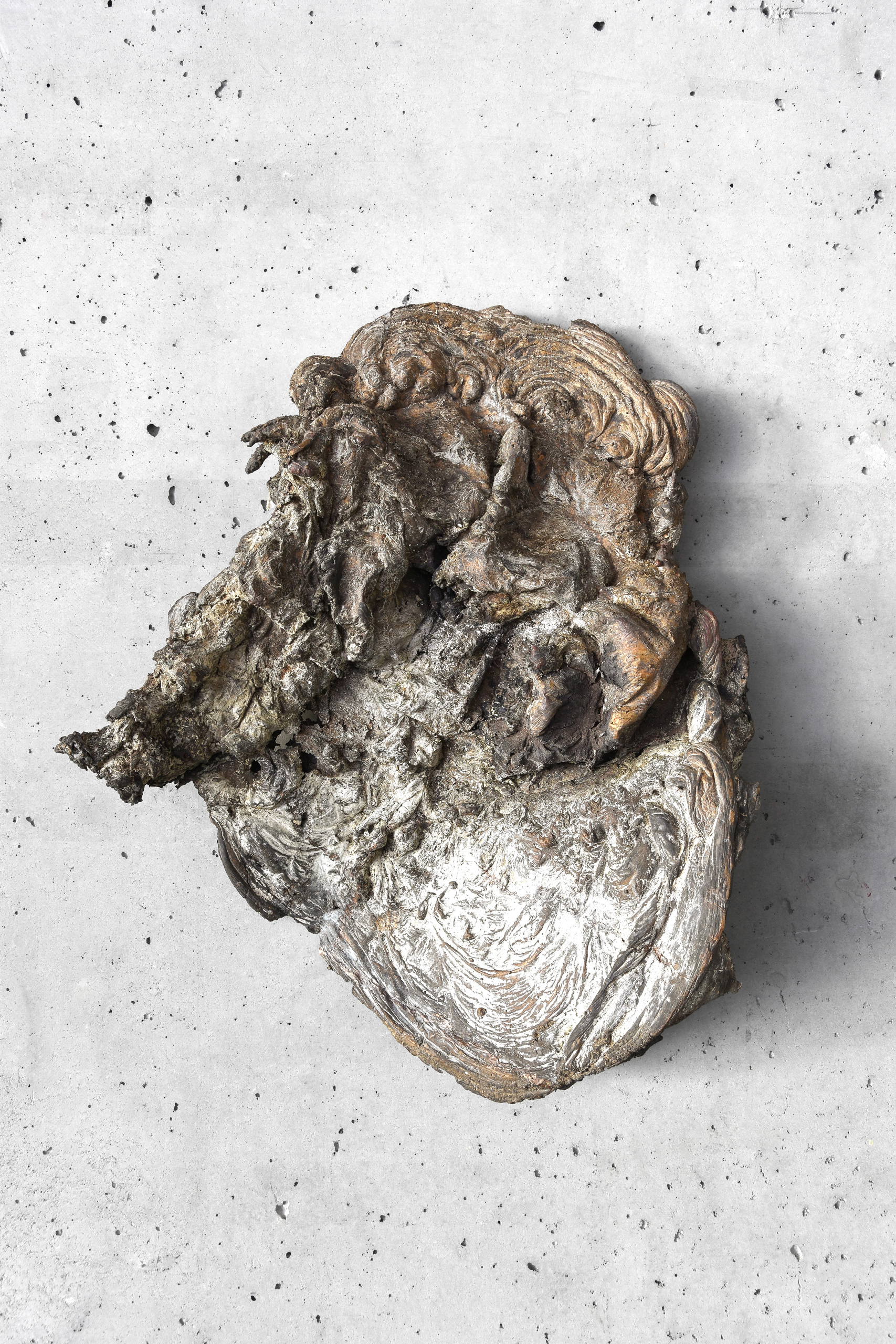 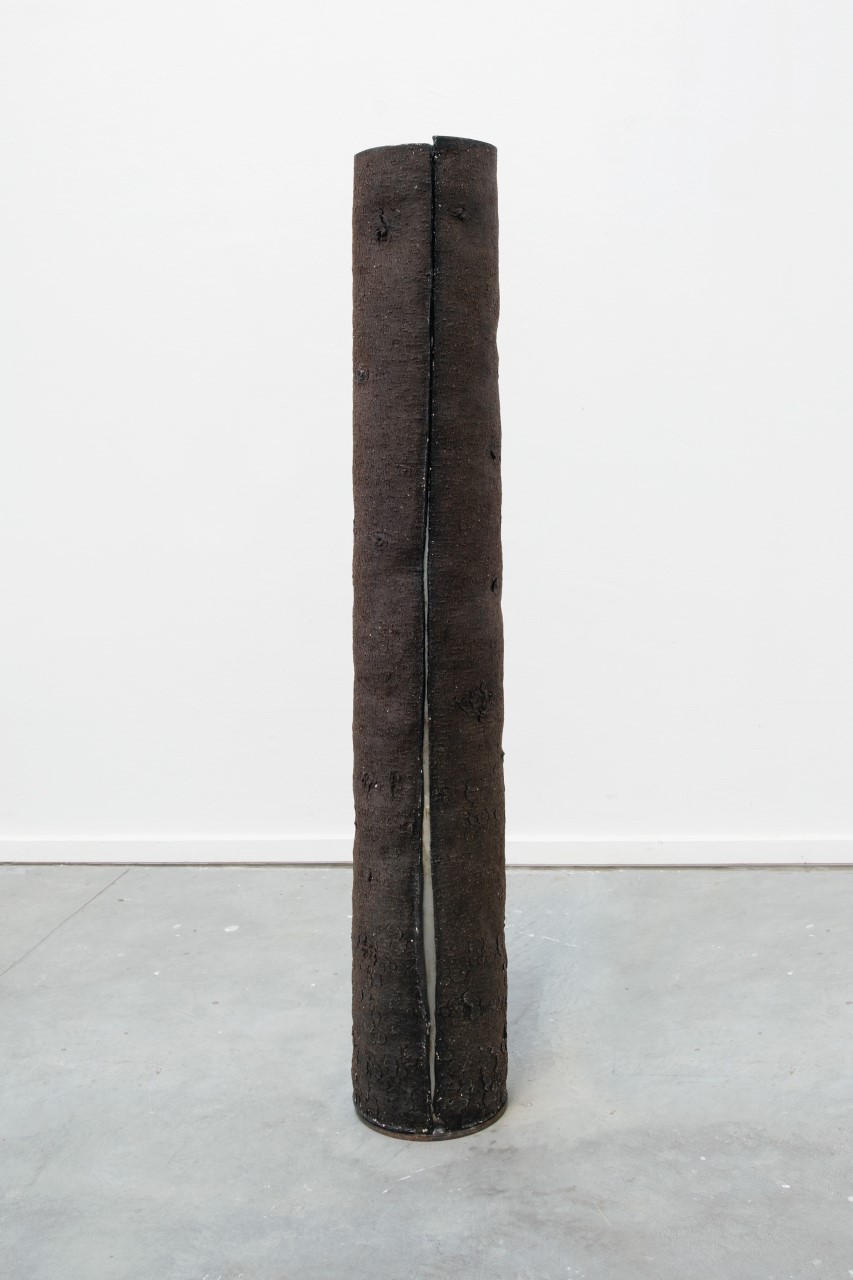 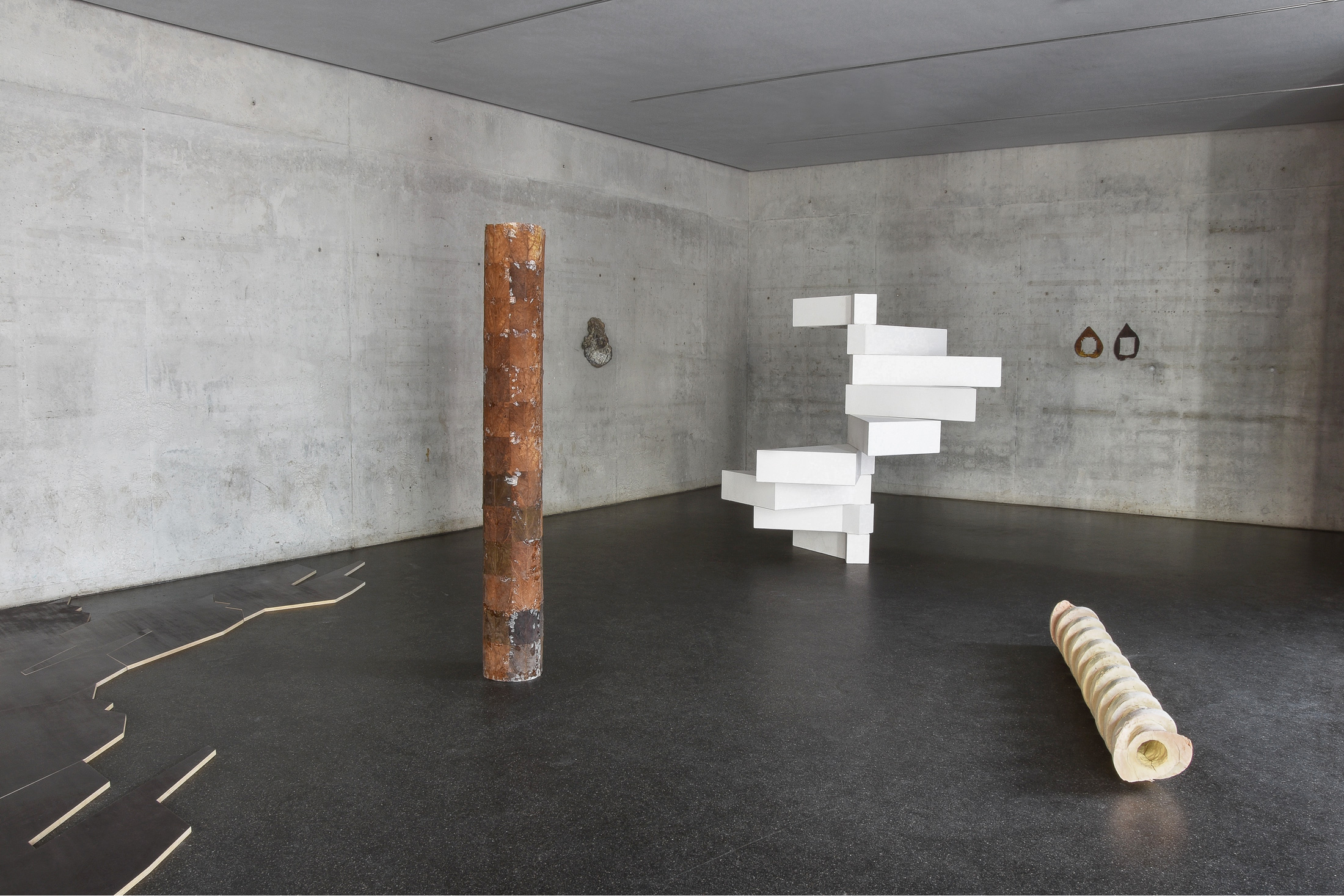 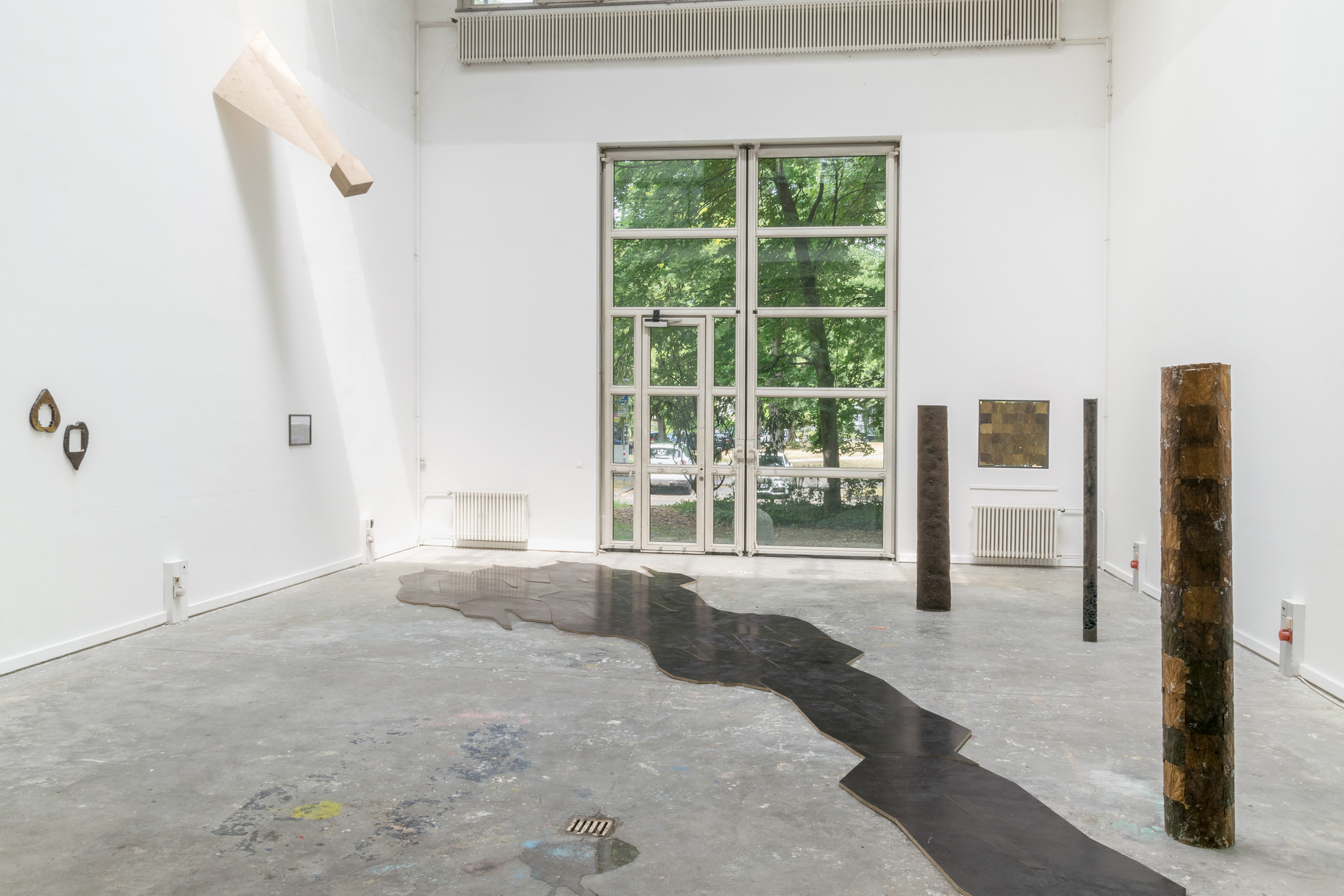